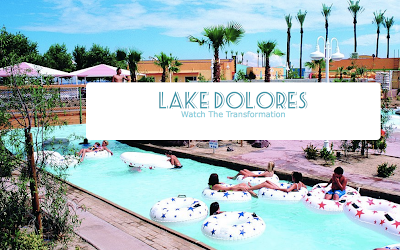 Recent talk is that a group is attempting to reopen Rock-a-Hoola as Oasis Theme Park.  Is it true?

According their website, http://oasisthemepark.com/ a group called White Water West has been attempting to lease and reopen the park.  The earlest post is from 2011, the latest, at the time of this blog update, from April of this year (2013).


"We have not given up in our efforts to reopen Lake Dolores. What we face now is still much easier then what we faced when we first started our Lake Dolores efforts in April 2011."

An article from May 5, 2013 in the Daily Press, outlines the challenges the group faces.

NEWBERRY SPRINGS • A new owner and a group called Oasis Theme Park are in negotiations to bring life back to the Lake Dolores water park as early as 2015.

The facility sits in a patch of desert northeast of Barstow near Interstate 15. It was most recently named the Rock-A-Hoola Waterpark, but it’s been closed for nearly a decade.

A Friday morning visit to the property — now a haunting, almost surreal visage of its former glory days — garnered the attention of a friendly man driving a pickup truck who identified himself as a security guard.

The guard was an associate of a man named Om Garg, the park’s new owner. Garg closed escrow on Lake Dolores in January, according to Inland West Development Project Manager Spike Lynch.
Lynch has been tabbed by Garg to oversee the cleanup of the dilapidated, graffiti-daubed structures inside the park, and a more protected perimeter of the area is expected soon.

Garg’s group recently received a permit for temporary power, Lynch said, which will help with what he called a “phased” project.

A call to a number believed to be Garg’s was not immediately returned.

The group is working with Chris Jackiewicz, the head of Oasis Theme Park.

“We’ve been working on getting this project started for some time,” Jackiewicz said earlier last week. “Before we even got started on this project, we did a little background research. There were millions worldwide who knew something about the property, whether good or bad.”

Jackiewicz is banking on that recognition — if only for its prominent location along the interstate — to entice investors.

He is convinced Lake Dolores, which was last open in 2004, can be a profitable entity and to do that, he said, he will build it out slowly.

“We want to start smaller and build interest over time,” he explained. “(People) see more added to it, they’re going to be interested in coming back.”

“I believe it will come to fruition, because we’re dealing with two good people,” Lynch said.